I just finished watching The Social Dilemma, which ironically enogh has been making the rounds on social media, and would love to share my two cents on the topic.

First things first, The Social Dilemma is a quite excellent docudrama. It carefully balances real life interviews and news footage with some quite convincing dramatizations of the issues that are being discussed. Even something as hard to grasp as algorithms and machine intelligence crunching data and personalizing content for maximized ad revenue is dramatized, giving viewers a more intuitive understanding of what the technology behind the scenes is actually doing. It asks - and answers - some very big questions, like, “What is the problem with social media?“, “How do we solve the problems of social media?” and “What will happen if we don’t/can’t?“.

I generally agree with the message being put forward in The Social Dilemma, with perhaps one smaller exception. Before I address this, though, I want to comment on another section of the film that piqued my interest.

How to have a healthy relationship with social media

Towards the end of the film, the interviewees share some of their own experiences with social media and how they protect themselves - and their families - from the negative effects of it. They mention some really good tips - many of which I have employed myself over the years. So I’d like to share a bit of my experience, and how I have remained sane throughout the years.

I stopped consuming most “news” a long time ago. Wikipedia is my home page when I open up my browser - and the Main page of Wikipedia is generally good enough to keep you up-to-date on world events that you probably should care about. 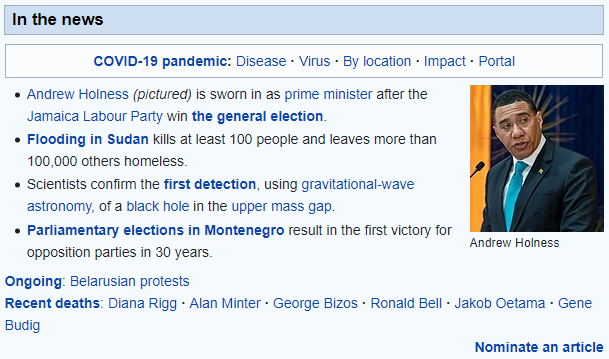 I think back to the tabloids I used to skim - online and offline - and it really says a lot about the value they provide when all they really tell you is the most radical, sensationalist things that have happened.

I was very late at getting a smart phone - which probably says a lot by itself. Nonetheless, the reason why it took some time for me to hop on that bandwagon was because I really didn’t see the value in that technology yet. It was just more noise than signal. When I did adopt the technology, however, I had only the bare minimum of apps installed, and quickly learned how to turn off notifications.

Related to the above point of blocking out noise, I filter my emails - unsubscribe from all newsletters and do not hesitate to mark unsolicited advertising attempts as spam. Similarly, remember facebook apps/games? I quickly realised that those requests could be permanently blocked. I must have had near hundreds of blocked apps before those stopped coming.

A few years ago - by pure chance before the Cambridge Analytica scandal broke - I decided I wanted to stop wasting time on Facebook. I looked up how to use the Facebook API and chrome extensions to selectively scrub my likes and comments from the platform. I programmatically deleted my albums and posts. Slowly, but surely, I undid pretty much all I had done there - leaving a bare minimum profile for the sake of being reachable on some group chats in messenger.

I don’t know if I really want to reduce screen time - I mean, even my books are digital, and there is no substitute when it comes to education - whatever the subject. I have, however, banned devices from the dinner table and unceremoniously confiscate all mobile devices some time before bedtime.

Nonetheless, I think there really only is one gold standard when it comes to having a healthy relationship with social media. Don’t.

How to solve the problems of social media

As I mentioned, there was one part of The Social Dilemma that I didn’t really agree with. It’s the solution to the problem. Perhaps, being a software developer and having developed solutions to problems pretty much my entire adult life has made me slightly biased here - and I’d be the first to agree with that observation. Regardless, this is how I feel at this point in time. The Social Dilemma briefly shows a clip of Facebook CEO, Mark Zuckerberg, proposing a solution to the problem - essentially, more AI and better algorithms.

Long-term, the solution here is to build more AI tools that find patterns of people using the services that no real person would do.

Justin Rosenstein comments on the seriousness of the problem, and the difficulty of a solution - even hinting what that solution might be.

I feel like we’re on the fast track to dystopia, and it’s going to take a miracle to get us out of it. And that miracle is, of course, collective will.

Now, I find I can agree with all of the above quotes to some degree, but if we’re being pragmatic here for a second - I would find Mark Zuckerberg’s statement to be the most realistic, in terms of implementing a practical solution to the problem.

I mean ask yourselves - how do you undo the damage of polarization and extremism that has been exacerbated by years of unregulated social media? How do you change collective will? Regulation might help prevent further damage and exploitation, sure. But do we know of any way of successfully changing collective will on the scale of 2 billion people, as what is being discussed in The Social Dilemma? Is there even a political body that could realistically enable such a planetary-scale initiative?

Frankly, and somewhat ironically, I think “AI” - meaning better technological solutions - is the only realistic chance we have at solving the problem.

I mean, remember what Tristan Harris says in his talk about the technological singularity.

There’s this much earlier moment when technology exceeds and overwhelms human weaknessses.

Human minds, as advanced as they are, are pysical machines, slowly evolving over millions of years. Technology has already reached a level where it is capable of exploiting our weaknesses - without our knowledge.

Mankind, for better or worse, has already lost the battle with technology. Somewhat remeniscent of the Terminator franchise - only technology could possibly save us.

A creative and meticulous Software Engineer who is passionate about delivering robust and general solutions through an iterative development process.